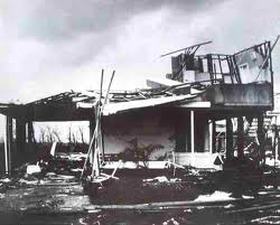 In 1974, Darwin housed a population of roughly 46,700 people (Bureau of Meteorology, 2014). Expansion was rapid, and despite the fact that building standards were required to resist the strong forces of cyclonic winds, many houses were inadequately built. (Northern Territory Library, n.d.). According to McNarma (2012), a vast majority of Darwin houses were susceptible to cyclones due to the fact that they were built in a tropical style (elevated houses with minimal roof connections). As a result of this, seventy percent of Darwin's houses were severely damaged by Cyclone Tracy (Miller, 2014).

However, since Cyclone Tracy new building regulations have been established in order to make houses more resistant to strong winds (Miller, 2014). Houses in cyclone prone areas of the Northern Territory are now designed to withstand category four severe tropical cyclones, and are regularly attended to in order to maintain their resistance (Department of Lands and Planning, 2014).

PREParing for cyclone season: 1974 versus now

The pictures below show two different levels of housing preparation for a cyclone season; figure 2 depicts a 'well-prepared home', whilst figure 1 depicts an 'unprepared home'. In Figure 1, a range of hazards are identified that could be extremely dangerous during a tropical cyclone; such hazards include unsecured garden furniture, overhanging branches, and loose roof tiles. As mentioned previously, due to lack of notice, a misleading trail and an ignorant disposition, residents of Darwin were not as prepared for Cyclone Tracy as they could have been, and a large majority of houses were similar to Figure 1: extremely hazardous. Many residents had not prepared for an incident of that magnitude, and unsecured debris caused significant damage around the city (McNarma, 2012).

Nowadays, cyclone prone areas in Australia are encouraged to prepare for the strong storms before cyclone season even begins. The Darwin City Council now conducts an annual 'Pre-Cyclone Season Clean Up' in order to remove any unused and loose debris that could be potentially dangerous during a tropical cyclone (Darwin City Council, 2013). The clean up requires house owners to remove any materials from their gardens that could be threatening during a cyclone, and place them in front of their houses to be picked up by council workers. Such materials include: old furniture, tools and loose building waste (bricks, sheets of corrugated iron etc). The 'Pre-Cyclone Season Clean Up' aims to create cyclone prepared homes, such as the one presented in figure 2.

As well as the 'Pre-Cyclone Season Clean Up', residents of cyclone prone areas in Australia are urged to prepare their emergency kits prior to cyclone season, so that they are fully equipped in the case of an emergency. Emergency kits for cyclones should include: bottled water, torches with spare batteries, a first aid kit, a radio, and non-perishable food items (such as tinned foods) (Queensland Government, 2010).

The following check list was composed by 'Emergency Management Australia', and has been designed to prepare residents in cyclone prone areas for destructive cyclones (Bureau of Meteorology, 2014):

The videos below depict two separate media warnings for tropical cyclones. The audio on the left is a radio warning that was provided for Darwin residents before Category 4 tropical Cyclone Tracy in 1974. The video on the right is a news report on television that was provided to Darwin residents before a potential Category 1 tropical cyclone warning in 2013.
As can be seen, there is a substantial difference in the quality of the technology that was used between 1974 and 2013. When comparing the two communication devices above, it is essential to consider the technology that was available for society at the time of each of the events. In 1974, the internet was yet to be commercialised, and social media was not as powerful in providing cyclone preparation advice for society as it is today (The Internet Society, 2014). Newspapers, television and radios were the predominant methods of communication for social media. Nowadays, with the advance of technology, social media is extraordinary in delivering guidance for natural disasters. Cyclone warnings, preparation advice and recommendations for evacuation are now exposed through news reports, internet websites, television adverts, Facebook and other social media operations.

The radio audio on the left (VIDEO 1 from 1974) provided its listeners with a brief outline of what they needed to expect when Cyclone Tracy arrived, and the precautions that needed to be taken in order to avoid injuries. Despite the fact that the audio outlines the necessary safety measures, it is very brief and does not elaborate on the tools and equipment that may have been necessary in an emergency situation.

The news report on the right (VIDEO 2 from 2013) provided its viewers with a visual representation of how they should prepare for a cyclone. Despite the fact that the cyclone described throughout the video was only a category one, the news reporter elaborates on bureau predictions, radar images, weather expectancy and more importantly, essential safety precautions that need to be considered when preparing for a cyclone (including a cyclone kit). Despite the fact that the cyclone mentioned throughout the video was only rated as being a category one system, people were strongly advised to prepare for the worst. 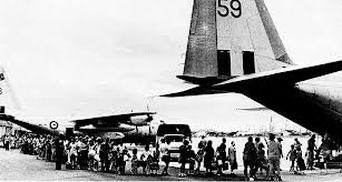 Due to the fact that Cyclone Tracy's destruction was extremely unexpected, pre-cyclone evacuations were not conducted for the cyclone, and many Darwin residents remained in their homes throughout the storm (Ling, 2014). As mentioned previously, approximately 43,500 people were in Darwin at the time of Cyclone Tracy; seventy one people were killed, and due to flying debris and broken glass, many people were severely injured (Northern Territory Library, n.d.). Essential services were destroyed by the cyclone, and due to the potential outcomes of food shortage and disease, mass evacuations were conducted a day after the cyclone (Ling, 2014). Over six consecutive days, more than half of Darwin's population evacuated the city; 10,000 left the city by road, and 25,000 people were airlifted to southern cities (Ling, 2014).

Unlike Cyclone Tracy, Yasi's death toll was confined to one, a young gentleman who suffocated after sheltering in a small space with a generator (Madigan, 2011). As unfortunate as this toll may be, it is a huge improvement from Cyclone Tracy's, indicating that pre-cyclone evacuation procedures that are used nowadays significantly limit the dangers of high categorised cyclones.