According to the Australian Geographic (2011), cyclones are strong, spinning, low pressure storm systems that vary in size and severity. They form in warm waters on either sides of the equator, and have gale force winds that can extend hundreds of kilometres from its centre (The Bureau of Meteorology, 2014).

The focus of this website will be on Cyclone Tracy, which was a tropical cyclone.

How do tropical cyclones form?

In Northern Australia, tropical cyclones mostly occur between October and May, where sea temperatures above 26.5 degrees Celsius and wet weather conditions provide ideal settings for them to form (ABC, 2014). Tropical cyclones require warm oceans to create energy; they can continue for many days over warm water, and only land or colder waters have the potential to dissipate their energy (The Bureau of Meteorology, 2014).
The Formation of a Tropical Cyclone:﻿
(Information for the diagram below was retrieved from the Bureau of Meteorology (2014).) 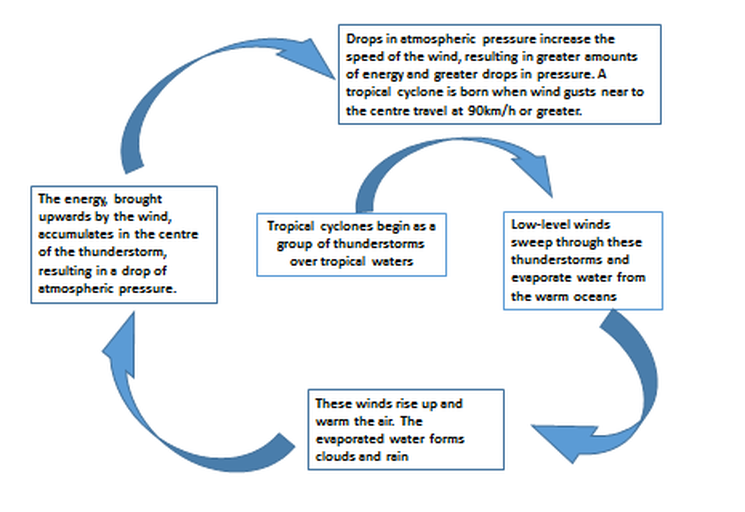 the structure of a cyclone

According to the Encyclopaedia Britannica (2014), tropical cyclones have three distinct parts:

1. The Eye
The eye is the centre region of a cyclone; it is the calmest part of the storm and unlike it's surrounding regions, it contains clear skies, light winds and warm temperatures (National Weather Service, 2010). According to the Encyclopaedia Britannica (2014), the eye often provides a sense of 'false security'; individuals that are uninformed about the structure of cyclones may believe that the calmness of the Eye is due to the fact that the cyclone is over; they are unaware that the cyclone is only midway through it's destruction, and that the other side of the Eyewall and the surrounding rain bands are still due to come. The eye of a cyclone usually has a diameter of roughly 40km, however they can vary between 10km and 100km.

2. The Eyewall
The eyewall is the region of a cyclone that surrounds the eye. It is the most destructive part of the storm as heavy rainfall, extreme winds and very dense convective clouds driven from the eye, create intense conditions for any type of environment (Bureau of Meteorology, 2014).

3. Rain Bands
According to the National Weather Service (2010), spiral bands of clouds and storms known as 'rain bands' emerge from the eyewall of cyclones resulting in heavy surges of wind and rain. The National Weather Service (2010) also states that due to the fact that cyclonic rain bands arrive in surges, there are often short moments of serenity, where no wind or rain can be found. 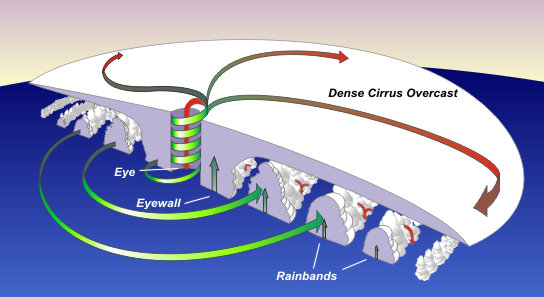 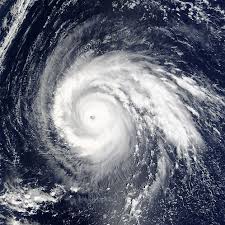 The intensity of a tropical cyclone is defined by five different categories; the higher the category, the greater the severity of the cyclone.