the deceiving trail of cyclone tracy

It was Christmas Eve 1974, Darwin civilians were partaking in annual Christmas festivities, and doing their best to reject any warnings about a potential cyclone due for the following day (Northern Territory Library, n.d.), as only a few weeks prior there had been a cyclone warning for the Category 2 tropical Cyclone Selma which never came (Brown, 2002).

According to the Bureau of Meteorology (2014), Cyclone Tracy passed the north of Darwin on the 22nd December, and continued to travel in a south westerly direction towards Western Australia. It wasn't until early on the 24th December, that the cyclone changed directions and intensified in the warm shallow waters of the Timor Sea before heading directly towards Darwin (University of Rhode Island, 2013).

Tropical Cyclone Selma's dissipation, combined with Cyclone Tracy's deceiving trail, meant that many residents ignored the warnings that were given to them and did not prepare to the extent that they should have (Brown 2002), and as a result, tragically, 71 people lost their lives (Department of Arts and Museums, 2014). 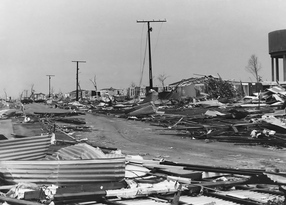 Darwin was destroyed by Cyclone Tracy due to the misleading trail and because of minimal preparation from residents. As a result of this destruction, Australian society (cyclone prone environments in particular) now has a greater awareness and understanding of the affects of cyclones and the impact that they can have upon the environment and the residents of the affected area. Since Cyclone Tracy, there has been a significant advance in preparation methods, housing structures, social media advice, tracking tools and technologies, forms of communication and evacuation procedures which has allowed society to be better prepared for any possible future cyclones.