are "largely dictated by the annual monsoon cycle" (Tourism Australia, 2014.) Darwin's climate differs dramatically depending on which season it is (Experience Oz, 2014). During the dry season, which runs from May until October, the days are typically dry, sunny and warm, with low humidity in the afternoons, and typically cool nights with temperatures ranging from 21°C (degrees Celsius) to 32°C (Tourism Australia, 2014). The wet season runs from November through to April and directly contrasts the dry season (Experience Oz, 2014). The wet season is characterised by high humidity, monsoonal rains and storms, with temperatures ranging from 25°C to 33°C. With the high humidity and temperature, monsoonal rains and storms, the wet season between November and April is also Darwin's tropical cyclone season, as tropical cyclones in this region mostly form from lows "within the monsoonal trough" (Bureau of Meteorology, 2014). 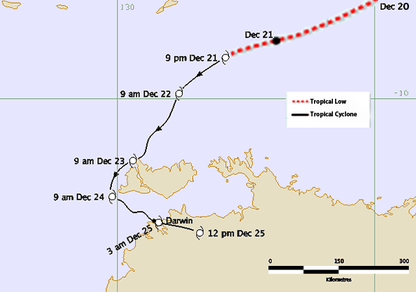 Cyclone Tracy was the second cyclone in history that was predicted to hit Darwin, the first being Cyclone Selma which never reached the city (University of Rhode Island, 2013). The University of Rhode Island (URI) further reports that Cyclone Tracy developed from a tropical low in the Arafura Sea, between Australia New Guinea, approximately 500km northeast of Darwin, and was first detected on 20 December 1974. URI explains that the tropical low was officially pronounced as a tropical cyclone on 21 December 1974 after receiving a satellite image from the National Oceanic and Atmospheric Administration, illustrating that the system had further developed.

After conformation that the system had developed in to a tropical cyclone, a series of four cyclone watches were issued by the Bureau of Meteorology, followed by a series of cyclone warnings throughout the next two days (National Archives of Australia, 2014). The National Archives of Australia (2014) continue explaining that  the Bureau of Meteorology then issued a cyclone flash warning, followed by a series of these flash warnings through the media which stated that the prediction was that the cyclone would hit Darwin in the early hours of Christmas morning, bringing with it very strong winds which would likely result in property damage. As there had been a previous cyclone warning only weeks before, for a cyclone that never hit, many residents did not prepare to the extent that they should have, though no one could have forseen the level of destruction that was soon to occur (National Archives of Australia, 2014). 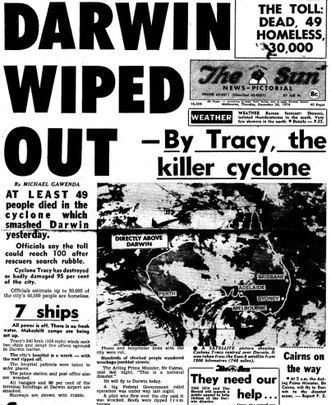 When Christmas Day (December 25) arrived in 1974, between midnight and 7.00am, the eye of the tropical cyclone, Cyclone Tracy, passed over the city of Darwin (National Archives of Australia, 2014). It is reported by the Australian Bureau of Meteorology (2014) that Cyclone Tracy led to torrential rain, totaling 250mm in 12 hours and winds that were recorded at 217 kilometers per hour (km/h) at Darwin Airport by the Bureau of Meteorology's anemometer before it was destroyed by the cyclone. The maximum of these winds were estimated to be 240km/h (Bureau of Meteorology, 2014).

At the time of Cyclone Tracy, in 1974, Darwin's population was 46,700 (Australian Bureau of Statistics, 2008), approximately 43,500 of which, were in Darwin at the time of the cyclone, with all but approximately 10,000 being evacuated to other parts of Australia after the cyclone whilst the clean up of the city was under way. (Northern Territory Library, 1998). Cyclone Tracy took 71 lives and injured many thousands, the destruction leaving an extremely large portion of the remaining residents homeless, completely destroying their poorly structured houses, most of which were elevated or 'stilt' houses built for the hot and humid weather of Darwin (McNarma, 2012). Below is a recount of the destruction and tragedy that Cyclone Tracy caused.
Below is a gallery of images which were taken after Cyclone Tracy, demonstrating just how much of the city was completely destroyed.